With Father’s Day coming up on Sunday, there has been quite a bit of media focus on how challenging it is for men to balance bringing home the bacon with being actively involved in parenting.  For years, the roles were really clear . . . men were the breadwinners and women were the caregivers.  A man’s responsibility was to financially support the family, mow the lawn, fix things around the house and be the family grillmaster.  They weren’t expected to change diapers, read bed time stories, soothe boo boos, cook dinner, pack lunches or volunteer in the classroom.  That was all women’s work. 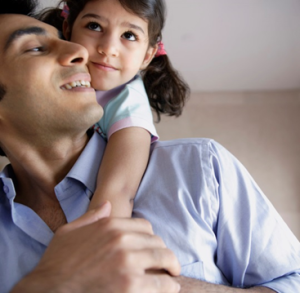 The trend is changing.  Many men don’t want to sit on the parenting sidelines any more.  They understand how important they are in their children’s lives and they are eager to embrace their role in their emotional and physical development.  Many men change diapers, take their turn getting up in the middle of the night, attend play dates, shuffle kids to school and extracurricular activities, scare away monsters, supervise bath time, stay home with sick children and take their turn as the evening’s short order cook.  They are discovering what women have known for years . . . it is exhausting and immensely rewarding work.

I have had many men as clients over the years.  I LOVE working with them because the men that are drawn to me are seeking to change, adapt and evolve.  They aren’t satisfied to do things just because that’s the way things have always been done.  They want to create life on their own terms based on their values and priorities.  They are ready to embrace the fact that they are conscious creators of their life and their business.

In some ways the men that are ready to step up and be more involved in their families have a harder time than their female counter parts.  They face all the challenges women face when they work outside the home (setting boundaries, time management, trying to fit it all in) PLUS some additional challenges most women don’t have.

First, many men are not taught how to be emotionally competent.  They don’t know how to handle their own emotions so they struggle with handling other people’s emotions.  Think about the messages we give little boys about handling difficult situations “Big boys don’t cry”, “You have to be the man and help out”, “Man up”, “Take it like a man”.  Little boys aren’t encouraged to be happy, joyful or over the moon excited and they aren’t allowed to be sensitive or sad.  It’s okay for them to be aggressive (it gives them the competitive edge) so little boys find anger and aggression as the outlet for all their emotions because those are acceptable for them.

Second, society sends men double messages.  There is the expectation that real men are involved dads and compassionate husbands but when it comes to acting on that, there is a lot of push back.  Daniel Murphy, the Mets player is an excellent example of that double message.  He missed the first two opening games of the year to be with his wife during the birth of his son.  He not only wanted to support his wife, he wanted to bond with his baby.  Several sports announcers were ruthless with him saying “You’re a Major League Baseball player. You can hire a nurse.  What are you gonna do, sit there and look at your wife in the hospital bed for two days?”  One announcer even suggested that his wife should have had a C-section before the season started.

It doesn’t matter if you are an employee or the business owner, society as a whole is not supportive of men taking time away from work to stay with a sick child, attend a school function, cheer on your kids in their activities, or be there when they get on/off the bus.  Supervisors, customers and employees will often respond to these boundaries with “Can’t your wife do that?”.

In order to be an evolved man who “has it all”, you have to have the ego strength to learn emotional competency AND set your boundaries and strength to stick with them even when others are challenging your choices.

I’d love to hear your thoughts on this post.